Tim Ferriss often asks guests on his podcast… “What are bad recommendations you hear in your profession or area of expertise?” Bad cryptocurrency advice abounds!

This sounds so obvious. How can it possibly be bad advice? Are you saying we should do less research? Yes! That’s exactly what I am saying!

If we assume, that by saying research, what we really mean is increasing our knowledge or expertise about the asset we are investing in, we can also infer that the assumption is more information… more knowledge, more expertise… will lead to better outcomes. Otherwise, why is the advice so persistent? Why give it?

And by assuming that what we are after is better outcomes, what that realllly means is better predictions.

This idea that more research will lead to better outcomes is flat wrong. It’s not just wrong in cryptocurrency investing. It’s wrong whether you were talking about market predictions, economic predictions, political outcomes, sports betting. It doesn’t matter.

Our brains are hard wired to be total crap at prediction. And more information doesn’t help. It hurts.

“In my opinion, trying to forecast the future is one of the biggest wastes of time, yet one that is nearly universal in our industry. Pretty much 80 to 90 percent of the investment processes that I come across revolve around forecasting. Yet there isn’t a scrap of evidence to suggest that we can actually see the future at all.”

Nassim Taleb addresses this in his book, Anti-Fragile. He calls it in The Green Lumber Fallacy.

The term comes from a story, by authors Jim Paul and Brendan Moynihan, in their book, What I Learned Losing A Million Dollars, in which “a fellow named Joe Siegel, one of the most successful traders in a commodity called ‘green lumber,’ actually thought that it was lumber painted green (rather than freshly cut lumber, called green because it had not been dried). And he made it his profession to trade the stuff! Meanwhile the narrator was into grand intellectual theories and narratives of what caused the price of commodities to move, and went bust. “

In another similar illustration, Taleb tells of a star Swiss franc trader, who’s inability to locate Switzerland on the map didn’t hinder his ability to make money trading it’s currency.

As it turns out, additional knowledge, even expertise, does not lead to superior results, when those results require predicting the future.

If expertise yields better outcomes, then what we should see is that the returns of actively managed mutual funds should beat the market on a consistent basis.

These guys get paid millions of dollars to pick stocks for a living, right?

In fact, what we see is that over any period of years, the number of funds which beat the market are exactly the number which would be predicted by a coin flip. 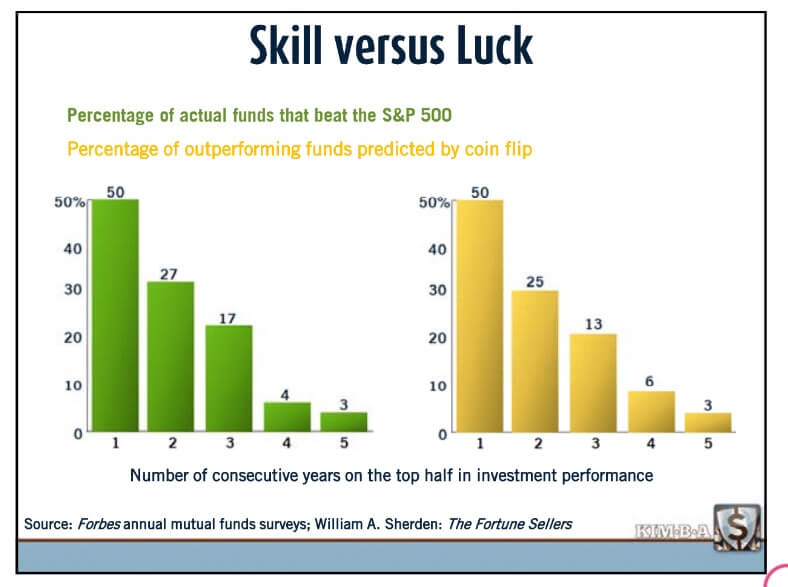 Same thing for economists. Look at the chart of summarizing economists predictions of US GDP. They’re not even remotely close.

The third chart is analysts predicting expected returns of the US stock market against the actual returns. Again, just ridiculous how far off they are.

OK. But is that just anecdotal? No, the academic studies back it up as well.

There have been more than a hundred studies that have been done over many, many years, by such influential economists and psychologists as Paul Slovic, Nobel-Prize winner, Daniel Kahnemann, Philip Tetlock and others, which conclude definitively that…

… beyond a minimum amount of information necessary to make an informed judgement, obtaining additional information doesn’t improve the accuracy of estimates or predictions.

(Side note: what has always interested me is how surprisingly little that minimum amount is to produce roughly the same result as an expert. I know it is counter-intuitive, hence the advice. But it’s true.)

The research finds that the additional information does not improve accuracy. Unfortunately, it does significantly inflate confidence in the prediction.

Those two things together are a really dangerous combination. Show me an overconfident investor and I’ll show you someone losing money. And, that is exactly what the research showed.

So, we know there is a very real downside. And we know that it has the opposite of its intended effect, which is to cause us to lose more, rather than make more. So why is this advice so dang persistent?

It comes down to the fact that this is the way that our prehistoric lizard brains are built. There are literally hundreds of cognitive biases… tricks that psychologists have categorized and named, that our brains play on us … that when left to our own devices make us really, really bad investors.

One of those cognitive biases is called ambiguity aversion. It says we don’t mind risk, but we HATE uncertainty. Therefore, we seek out information, falsely believing that that will create less uncertainty. But really it doesn’t.

Another is called confirmation bias, which is the tendency of people to seek evidence confirming an already held opinion and to avoid looking for that which might upset their carefully constructed mental models.

For example, those who stopped reading, after the first minute or two, when it created cognitive dissonance … the effect of simultaneously trying to believe two incompatible things at the same time.

The other problem we face is that our brains are explanation machines.

We can laugh at the caveman who scratched his nose and moments later it began to rain. He then spends a lifetime creating an elaborate ritual of dances and nose scratching to entice the life-giving rains to come. It’s known as an illusory correlation.

And yet, we do the exact same thing … we are told to do our research. We do that. We make money. Not because we did our research. But because cryptocurrencies went up 2000% last year!!!

You could throw a dart at a print out of OnchainFx and make the exact same money! But our brain is convinced of the cause and effect.

Technical analysis works the exact same way … it works just often enough to make you think you can make money from it but not often enough that you actually can. It is our explanation machine at it’s best … the exact same system that causes us to see the man-in-the-moon, an elephant in the clouds, or Jesus in a pastry.

Moreover, the research shows the stress associated with uncertainty increases the level of illusory pattern recognition. So in situations where we aren’t in control and don’t know what’s happening, like the markets, we’re more likely to see correlations where there aren’t any.

As Pogo said, “we have met the enemy and he is us!”

I know for some people, especially those who are new to investing, this can be disconcerting. The idea that, if I can learn enough, or hire someone who has learned enough, I can be successful, is the lifeboat many cling to.

But, in my view, it shouldn’t be disheartening. It should be liberating! What it means is that systems win over information.

So here are the takeaways …

1. Focus on the knowable vs unknowable and the differences between the two — For example, that the future of markets are stubbornly unpredictable but other things are not. Human behavior, for example … your opponents in this great game of money, are predictably irrational.

2. Focus on investment systems and frameworks that don’t rely on the false security of analysis or the myth of stock-picking. As Ray Dalio says, “He who lives by the crystal ball eats shattered glass.”

3. Remember “A smooth sea never made a skillful sailor.” In other words, you don’t know anything about anything, and neither does anyone else, until you’ve been able to make money in bear markets. Everyone is a genius until the market punches them in the face.

Something to consider. I hope you found it helpful …

And BTW, if all that squares with the way your brain works too, and you want exposure to cryptocurrency type returns, but with all of the crazy taken out, you might want to check out my weekly webinar, that I do. It’s called “How To Invest in Cryptocurrency and Protect Profits Even If The Bubble Bursts”.

As always. If you have any questions at all, about this topic, or anything else, just email me at askkim@sanecrypto.com. I read and answer every email personally. Or leave it in the comments below.