Behavioral Finance: Profiting From Irrational Behavior… Yours And Others Ahhh summertime! The time of year many of us go somewhere, anywhere, to get away from the heat. Which is also, usually, a great time to catch up on your reading.

So, I thought it would be a good time to share my recommended behavioral finance reads.

Why did I pick behavioral finance?

Because, as the famous bank robber, Willie Sutton, replied when asked why he robbed banks, “Because that is where the money is!”

And because, as Morgan Housel points out, in one of the recommended articles:

“The finance industry talks too much about what to do, and not enough about what happens in your head when you try to do it.”

Where’s the money in behavioral finance you ask?

I’ll tell you a story about my deepest scar as an investment manager.

My phone rings, as it did quite a lot during those days and weeks.

My job, during that period, was to be “the believer of last resort.”

Sometimes clients just needed a little reassurance. Other times I had to talk them off the financial ledge.

We had our clients positioned, from a portfolio perspective, to weather this sort of storm. And we talked often, for years, almost ad nauseam, about our not caring whether the market went up or down.

But this was admittedly pretty different.

There was a period of time where we were legitimately on the brink of a global financial collapse. And it WAS really scary.

The closer you were to retirement, the scarier it was!

The call was from one of our self-managed clients. It was him and his wife on the call.

“I am going to sell the portfolio and go to cash. I CANNOT lose everything I’ve worked for my whole life.”

His voice was trembling.

He and his wife were both in their late 60’s. Retired. With enough to live on. But not a lot more.

His wife said, “I told him to call you first. I think this is a really bad idea. We’re down, but the portfolio is still generating enough income for us to live on.”

Her husband, just kept repeating, to every entreaty, “I CANNOT lose everything.”

After over an hour of trying to convince him, at his age, this was financial suicide, we hung up.

I just watched a man leap to his financial death and I was powerless to stop him. His fear overrode every logical argument we could make.

I sat at my desk and sobbed. I suspect his wife did too.

Want to know the secret to investor success?

The vast majority of your success, or failure, I would argue maybe even as high as 90% of your success as an investor, is not about what happens in the markets.

It’s how you react to what happens. Or more specifically, don’t react, that determines your success as an investor and therefore your future standard of living.

In Hierarchy of Portfolio Success, Barry Ritholtz stack ranks the factors affecting the return of an investment portfolio:

“Specifically, from the moment someone starts saving for retirement, until the day they begin to take their required minimum distribution at age 70½, what are the factors that determine just how successful that portfolio is in terms of net, inflation-adjusted returns.”

At the bottom of the list, in terms of impact, are security selection, costs and expenses and asset allocation.

At the top? Investor behavior and discipline.

Quantifying the impact of investor behavior on portfolio return

The Quantitative Analysis of Investor Behavior (QAIB) is a study done by Dalbar, a respected research firm, for the last 23 years. And I have been quoting it almost as long.

Year after year, without fail, the average investor earns less, in many cases significantly less, than the investments they are invested in, because of their decisions to buy and sell.

And, in a sad confirmation of what I witnessed when my client leapt to his financial death in 2008, Dalbar says,

“We have also seen that inflows and outflows (which is wonk speak for buying and selling of an investment) all too frequently come at the worst possible time.

For the most recent evidence of this, one needs to look no further than last year when the three best months of 2016 (March, July, and November) coincided with either neutral or negative cash flow’s. This behavior has been identified year after year since QAIB began, in 1994.”

Translated, this means year after year, market cycle after market cycle, investors react to fear and greed, causing them to buy tops and sell bottoms, over and over again.

What this tells me, as an advisor or mentor, is my most important job is to shine a very bright light on this and help people manage it. 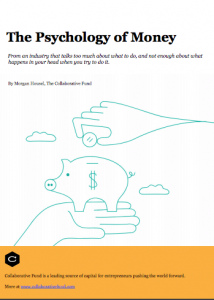 The first is an outstanding report, by Morgan Housel, which I referenced earlier, called The Psychology of Money. (Note: I would also recommend pretty much anything Morgan Housel writes.)

In The Psychology of Money, he outlines 20 different intellectual flaws, emotional biases and other causes of bad financial decisions, with names like “man-in-the-car paradox’ and ‘historians are prophets fallacy’, in a very readable and approachable way.

Specifically, the ways in which our brains have been hard-wired, over millions of year of evolution, to cause us to react in ways that make perfect sense from an evolutionary perspective, but not so much from an financial perspective.

I am going to give you two choices here. I would recommend you read either or both.

Mean Markets and Lizard Brains: How to Profit from the New Science of Irrationality is a great book by Dr. Terry Burnham. Quoting from the Amazon description: Mean Markets and Lizard Brains, Terry Burnham, an economist who has a proven ability to translate complex topics into everyday language, reveals the biological causes of irrationality. The human brain contains ancient structures that exert powerful and often unconscious influences on behavior. This “lizard brain” may have helped our ancestors eat and reproduce, but it wreaks havoc with our finances.

Going far beyond cataloguing our financial foibles, Dr. Burnham applies this novel approach to all of today’s most important financial topics: the stock market, the economy, real estate, bonds, mortgages, inflation, and savings. This broad and scholarly investigation provides an in-depth look at why manias, panics, and crashes happen, and why people are built to want to buy at irrationally high prices and sell at irrationally low prices.

Most importantly, by incorporating the new science of irrationality, readers can position themselves to profit from financial markets that often seem downright mean.”

I knew Terry, back in the day. We met, I interviewed him for my radio show and he wrote a blurb for my book, if I remember correctly… so I am kind of biased toward his book. I have been recommending it for a very long time.

But if you want to get to roughly the same place, but in a shorter form, take a look at the article, by Jason Zweig, called “Is Your Brain Wired For Wealth?”

And then finally, no treatment of investor behavior would be complete without a book on randomness. So again, I am going to give you a choice. I recommend you pick one or both if you want extra credit. They are both very good: The first is Fooled by Randomness: The Hidden Role of Chance in Life and in the Markets by Nassim Taleb.

If you’d like to hear my interview of Nassim, on this topic, it was Episode number 4 of the SANE CRYPTO Podcast.

From the book jacket:

“This book is about luck–or more precisely, about how we perceive and deal with luck in life and business. Set against the backdrop of the most conspicuous forum in which luck is mistaken for skill–the world of trading–Fooled by Randomness provides captivating insight into one of the least understood factors in all our lives.” The second book is The Success Equation: Untangling Skill and Luck in Business, Sports, and Investing, by Michael Mauboussin.

You could argue that neither of these books are about investing, or behavioral economics. Which is true.

But it is the way our brains misinterpret randomness, and are confoundingly poorly equipped to deal with it, that creates the opportunity, or the edge, to improve our investment outcomes.

What this all boils down to is markets are not predictable but that people are remarkably predictable in their irrational response to markets and therein lies the opportunity for profit.

So just to recap my behavioral finance picks:

And in understanding that, not only will you know yourself better, but also your opponents, in this great game of money.

And THAT is where 90% of your outcome is determined, not the assets you pick or how you allocate among them.

As always, I hope you found that helpful.