How To Protect Your Retirement Savings

Amid all the destruction left when Hurricane Michael came ashore at Mexico Beach, Florida, one home was left standing, seemingly unscathed, while everything around it was leveled.

Although it is known as The Sand Palace of Mexico Beach, the press dubbed it “The Hurricane House.”

The reason it survived is… it was meant to. 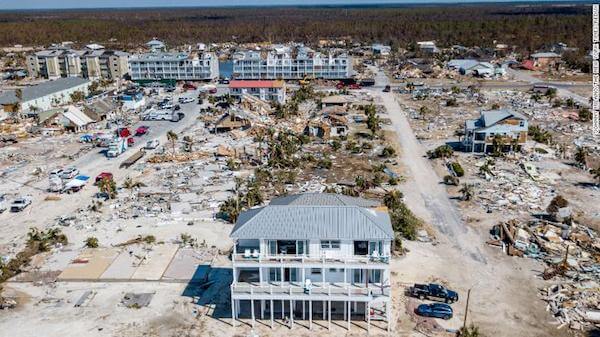 This recently finished, 3 story, four bedroom, vacation rental was, apparently, comfortably appointed. But what made it attractive to renters during good times, belied the state-of-the-art hurricane-proofing that was hidden underneath.

The owners told CNN that it cost something like 30% extra to add this extra protection. They specifically built it to withstand “The Big One”.

But they sure didn’t expect The Big One to come so soon!

“Though its roof and most windows and doors remained intact, the house was not unscathed. The Sand Palace Facebook page said that the ground floor and the stairs up to the middle floor are gone, along with windows in one of the bedrooms. All the utilities have to be redone, and one of the heating and air units is gone, too.”

But the point is, the house is still standing. And that was no coincidence.

The hurricane house on Mexico Beach offers some great lessons for investors who will someday need to live for 40+ years on their retirement savings.

1. You never know when or if “it” is coming. Prudence demands you design for it anyway.

Up until last week, the panhandle of Florida had not seen this sort of extreme hurricane. The conventional wisdom was that only southern Florida got storms this strong.

But the owners of the hurricane house built to 250mph… way above code. They estimate it cost them about 30% more to build it that way.

2. It can be attractive but still built to withstand risk

Pictures on their Facebook page show this was a really nice beach house.  I’d certainly have been happy staying there for my vacation rental.

What you don’t realize just by looking at it is it’s sitting on reinforced concrete piers sunk 40 feet in the ground. Even the walls are reinforced poured concrete.

A portfolio built to withstand risk doesn’t necessarily have to settle for “ugly” returns.

3. Revisit your risk management strategies periodically and modernize when necessary

Apparently, it wouldn’t have been that expensive to retrofit the older homes in Mexico Beach with the more modern building techniques and materials developed since they were first built.

The same is true of portfolio management. This isn’t your grandfather’s 80/20 portfolio of stocks and bonds anymore.

There is a whole new world of modern investment strategies, often using derivatives, combined with newer asset classes that provide a much bigger toolset for accomplishing the dual objectives of managing risk and producing sufficient return.

4. It is unrealistic to expect to be completely unscathed when the big one hits.

Had Mexico Beach been hit by a Category 1 or 2 storm, the Sand Palace probably wouldn’t have even batted an eye.

It would be like the story of the Three Little Pigs saying to the Big Bad Wolf:

“You can huff. And you can puff. But you can’t blow my house down!”

But, in a violent 150 mph monster, no matter how you plan, some things are going to have to give.

Your goal, at that point, is to minimize damage. And it’s all relative. You don’t care that a window was blown in when your whole town was leveled and people died.

As long as the whole is basically intact, the portfolio has done its job… even if there is a bit of water damage that will take a year or two to clean up.

In the CNN article, the owners said, “A lot of people criticized us. Our friends said, why didn’t you put more windows in?”

Social proof is so strong. It says humans, in the absence of certainty, look around, see what everyone else is doing, and do the same thing.

We are herd animals. And it is very hard to break away from the herd.

While the herd may feel safe, very often it is the opposite.

To me, bitcoin is like a superfood for your portfolio…

It diversifies, hedges against inflation AND has returned 334.91%, on average, over the last eight years… Going from 5 cents to close to $6500 today.

No guarantee returns will be that in the future, of course. But the fact that it could makes it a MUST in my portfolio.

As always, I hope that helps.